From natural wonders to live concerts and events, Anderson County offers fun for all ages.

Much to see and do around Anderson County

Anderson County offers a variety of incredible natural wonders and fun for all ages from the historic sites and museums to bustling small venues across the county, to live concerts and events in the Anderson Civic Center, to the thunderous roar of the Anderson Motor Speedway, to boating, fishing, and tubing on Lake Hartwell and the awe-inspiring outdoors. In fact, no matter where you go you will find the warmth and charm of Andersonian locals. Anderson County encompasses nine municipalities each with its own unique style and elegance. In particular, there is a piece of home and a smiling face in every corner in Anderson County. 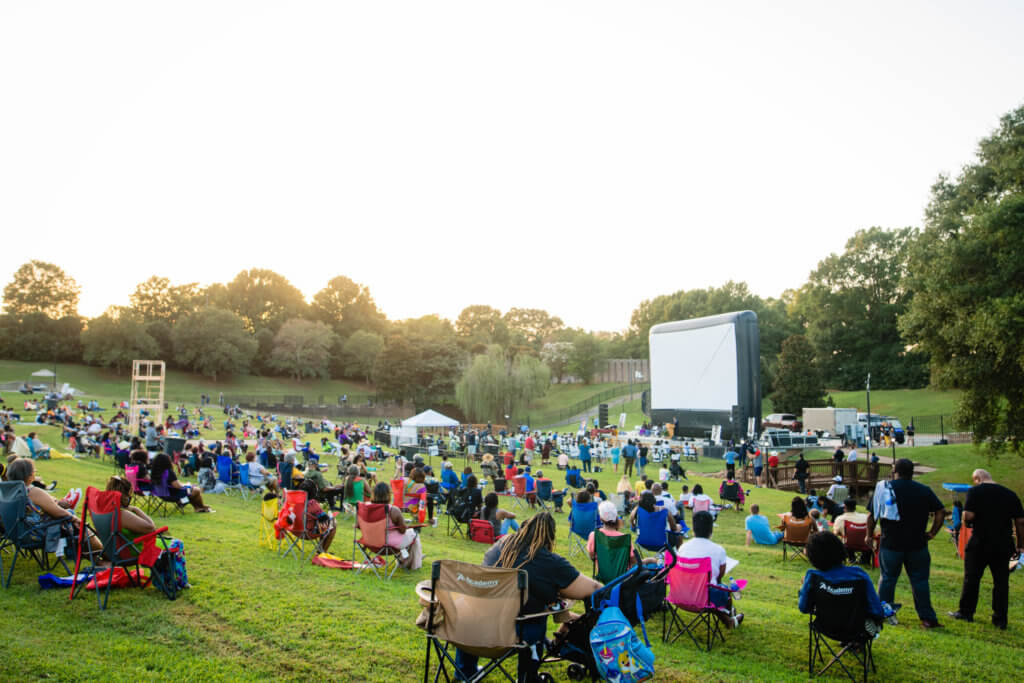 Anderson County Museum contains interactive exhibits and artifacts pertaining to local history. In particular, the museum houses the archives for genealogical and local history research as well as a gift shop featuring Anderson County and South Carolina memorabilia, locally-made crafts, and foods. Other exhibits include the Anderson County Hall of Fame; an interactive Heritage Corridor exhibit that features an in-depth history of the nine Anderson County municipalities; a special military exhibit; a large 3-in-1 exhibit discussing the rich, intertwined history of agriculture, textiles, and electricity.

The Quilt Trail started in 2010 with a single painted quilt square. It has now grown to over 180 square and spans three Upstate counties as well as multiple others throughout the state. Quilt panels can be seen on historic buildings, schools, parks, businesses, and homes. Meanwhile, with quilting being a tradition in the Upstate the Quilt Trail provides a way to preserve the history of family quilts and carry on the heritage of Anderson County.

Anderson Art Center is a 100-year-old 33,000 square foot building that is a cultural hub for the arts. Namely, space at the center includes galleries for permanent and rotating collections, the Bay 3 Artisan Gallery, and classrooms. Also, he Art Center is the home of the Anderson Convention & Visitors Bureau’s visitor center and bureau offices.

Located within Anderson County, Pendleton is one of the largest historic districts in the nation. The entire town is on the National Register of Historic Places and the downtown area alone has more than 50 buildings constructed before 1850. Examples of restored plantation architecture can be found just minutes from Pendleton. Large houses with stately front porches are reminiscent of the gentility of the 19th Century. The Boxwood Manor, Ashtabula, and Woodburn houses, circa 1825 and 1828 respectively, are now museums featuring many period antiques.

Shopping Centers With more than 40 shopping centers in the area, Anderson has many shopping options including major national chains such as Dick’s Sporting Goods, Kohl’s, Talbots, Target, Old Navy, and Pier One. Anderson Mall features anchors such as Belk, Dillards, and JCPenney and has more than 76 nationally recognized specialty stores, including Aeropostale, American Eagle, Bath & Body Works, Victoria’s Secret, and Journeys. Anderson also has several specialty boutique stores in the downtown area. Outlets less than a one-hour drive from Anderson are havens for bargain hunters. You can shop until you drop with both the Tanger Outlet Center in Commerce, Georgia, and the Prime Outlets in Gaffney, S.C.

Anderson County boasts a variety of restaurants, diners, and delis from the Southern favorites like Grits & Groceries and the Coach House Restaurant that carry an emphasis on homestyle cooking to cultural culinary delicacies that range from the Mediterranean, Mexican, Italian, Greek,  Indian, Japanese, Thai and Asian Fusion flavors. Moreover, there is a taste of something for everyone from those looking to try something new to the refined palate seeking fine dining.  Anderson County has a taste of everything with over 172 restaurants serving everything from local barbeque to fine-cut steaks.

One can visit one of the many bars, pubs, or breweries such as Golden Grove Farm & Brew or Carolina Bauernhaus for beverages. And, for a sip of some stronger spirits, tastings are offered at the locally owned and operated Six and Twenty Distillery as well as the Palmetto Distillery.

Anderson County is home to several festivals which take place throughout the county. The Sugar Foot Festival in Honea Path, the SC Chili Cook-Off and Standpipe Festival in Belton, the Spring Jubilee, Old Farm Days, and the Fall Festival in Pendleton are just a few.

Lake Hartwell is located on the South Carolina / Georgia border and is one of the Southeast’s largest and most popular recreational lakes. It has been named by B.A.S.S. as being among the best in the Southeast on the list of Top 100 Bass Lakes in America six times in a seven-year period. This man-made lake is 56,000 acres big with 962 miles of shoreline. In addition, the lake has an average depths of 185 feet and elevations of 657.5 feet. Three major rivers, the Savannah, Tugaloo, and Seneca, feed into the lake reservoir. In addition, there are also another 25,000 acres provided around the lake so as to give ample access points to visitors.

Moreover, the lake’s shoreline is dotted with boat landings, recreation areas, campgrounds, and marinas.  Restaurants serving food and beverages to visitors wandering up by way of water or land also freckle the shoreline. Interstate 85 bisects Lake Hartwell and makes the area easily accessible to visitors from multiple access points. Naturally, Lake Hartwell leaves a lot to be discovered and explored with many coves, islands, and beaches.

The B.A.S.S. Nation Series is a group of locally organized clubs networked on a global level. Members participate in tournaments, conservation projects, and initiatives, as well as youth programs. In particular, the series takes a major role in reducing pollution to lakes and preserving the natural habitat. B.A.S.S. Nation Series held the Southeastern Regionals at Lake Hartwell in April 2021 and the Carhartt Bassmaster College Series in March of 2021. Overall, the series will bring anglers from all over the country to the Upstate for the tournaments.

Lake Russell boasts 26,000 acres of water and 540 miles of shoreline. Naturally, with warm sunsets, beautiful scenery, and ample space, this is a great lake for boating, fishing, camping, and sailing. Lake Russell is a man-made lake bordered by South Carolina and Georgia. Accordingly, it is accessible in Anderson County from the Mountain View Recreation Area and the following boat ramps: Smith McGee, Sanders Ferry, and Gregg Shoals.

Lake Secession covers 1,425 acres. The lake is 6 miles long and almost a mile wide. Naturally, this lake is characterized by beautiful water and scenic views. Moreover, visitors enjoy fishing from the shoreline or boat, camping, boating, sightseeing, hiking and biking along the trails, or swimming.

Broadway Lake, also man-made and built in the 1940s, is located in Anderson County and covers 300 acres. It features a boat launch ramp, fishing spots, and three parks. The lake is fed by Broadway Creek, Pea Creek, Neal’s Creek, and Cupboard Creek. As a result, the water discharge from the lake feeds the Rocky River which flows into Lake Secession. Tucked away off Belton Highway, Broadway offers a quieter, more serene lake experience for families and friends. 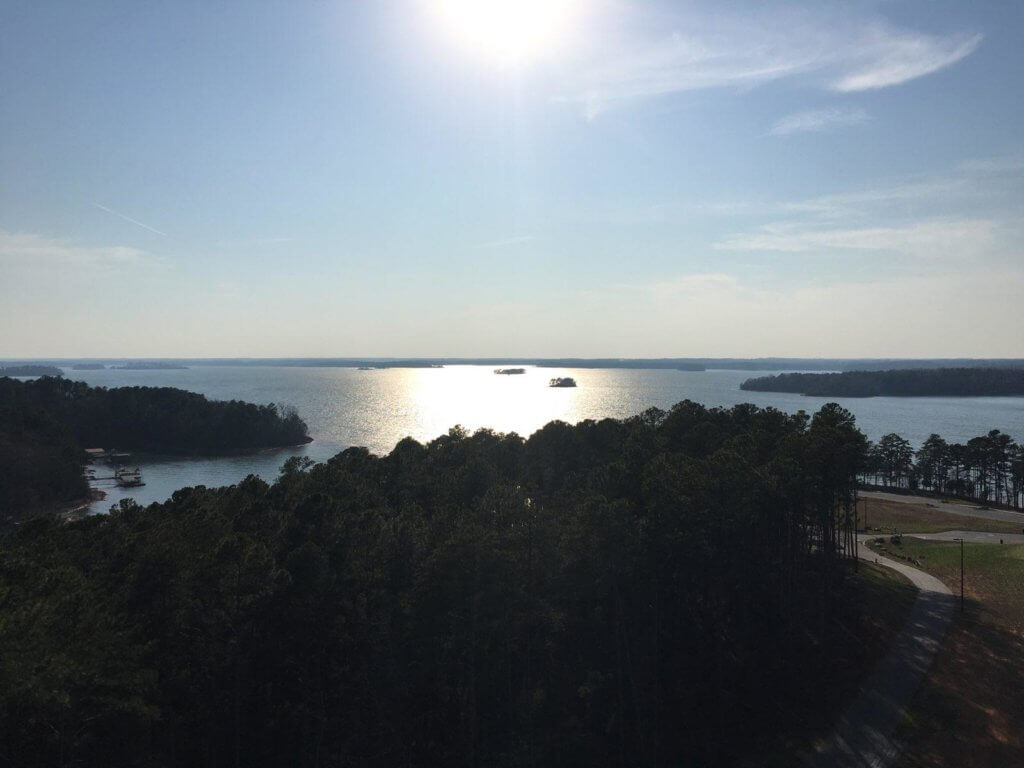 Lake Hartwell in Anderson County offers many recreational activities from fishing, boating, and tubing to swimming and sunbathing.

The Upstate boasts more than 75 golf courses, 11 of which are located in Anderson County. Golf tournaments draw an impressive list of professional golfers and celebrities. Courses attract golf enthusiasts from all over the Upstate.

ASEC is the main recreational hub for the county. The ASEC offers entertainment and recreation venues for everyone with a 14,000-seat amphitheater, a 65-acre sports center, and a 37,000 square foot civic center. The Anderson Sports Center and Entertainment Center includes many areas for activity within the complex. The Center has four softball fields, one baseball field, three soccer fields, eight tennis courts, miles of paved walking paths, picnic areas, and a duck pond. The duck pond at the Chris Taylor Memorial Park portion of the area is encircled by a walking trail that includes shade-covered bridges and gazebos. The one-acre Kid-Venture playground uses ideas provided by local children. Naturally, it is often populated with the sounds of play and laughter on any day with pleasant weather.

Find out more at www.andersonevents.com

The tennis courts in downtown Belton are home to the single largest sporting event in Anderson County, the Palmetto Tennis Championships. Specifically, the Palmetto Tennis Championships are the qualifying event for the southern regionals. As a result, this tournament averages over 400 players along with parents and coaches attending the week-long event.

The T. Ed Garrison Livestock Arena is one of the South’s largest livestock arenas. Clemson University operates the facility which hosts regional rodeos and livestock shows. In addition, Garrison Arena also hosts the Horse Play during the month of  May. Likewise, each year the arena holds a variety of shows, which includes dressage, hunter/jumpers, and combined training. Also, the venue hosts English, Western, and Arabian riders as well.