Crappie anglers from several states were hosted by Anderson SC Convention and Visitors Bureau to compete on Lake Hartwell. The February 26-27 Region 2 event was presented by Bass Pro Shops/Cabela’s. Anglers were vying for a guaranteed payout of $165,000 in cash and prizes, including the $50,000 points race that would crown the 2021 points leaders. The 2021 Classic was the culmination of the trail’s 25th-anniversary celebration as they complete a quarter-century of providing competitive crappie fishing.

Competing anglers were met with hot temperatures in the 80s and mild winds on Friday. The weather cooled down Friday night and Saturday temperatures were in the 70s with winds blowing 10 to 20 mph from the SE. Recent heavy rains had the water rising quickly. The water was clear but with pockets of stain.

Leading the pack after day one in the Pro Division were Frank Haidusek and Michael Parker with 12.53 pounds. They also had Big Fish on day one with a 2.32-pound slab. Heath Martin and Matt Eskridge were leading in the Amateur Division with 9.81. A total of 80 boats fished the event, 35 in the Pro Division and 45 in the Amateur Division. A total of $ 167,000 was distributed to the winners. 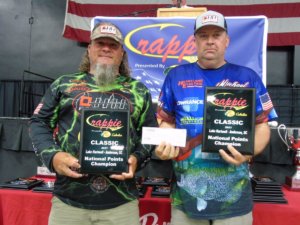 Frank Haidusek and Michael Parker held on to their day-one lead to take the top spot in the 2021 CUSA Classic on Lake Hartwell. Haidusek from North Newton, KS, and Parker from Grain Valley, MO, brought a two-day total weight of 22.96 to earn the first-place prize of a Ranger 518 with 150 Mercury, trolling motor, electronics, on-board charger, and a Driftmaster Rod Holders package. Their bag included Big Fish of the tournament at 2.32 pounds to add $1,300. They also added the Jenko Bonus of $100. Their total winning package is valued at $52,375.

“We found dirty water in the back of 2 creeks,” reported Haidusek. “We were targeting laydowns, manmade brush, and open water in pockets that ranged from 9 to 15 feet deep.”

Haidusek and Parker used 13.5-foot Warpig HH Rods and Reels to single pole the structure. They used MAD Shankenstein 1/8 oz. Crappie Jigs with 2-inch ProTuff Stryker plastics in black/chartreuse and monkey milk. “The rain we received before the tournament helped us as it dirtied the water,” said Haidusek. “We fished on the Seneca arm. The key was that we fished clean. We only lost one fish that we got to the top of the water.”

“I want to thank my wife for always supporting me,” continued Haidusek. “For holding down the fort for the 16 years I was gone in the military and now the last 8 years as I travel the road fishing 3 national trails.”

“I want to thank Eric and Leann with HH Rods and Reels,” concluded Haidusek. “Thank you for believing in me and making me a signature rod that has turned out above and beyond anything I could have wanted. Thanks to Dalton from ProTuff Baits for helping me when I transitioned from the military, for providing awesome baits, and for being a great friend. Thank you Jerry from Mad Crappie Jigs and the rest of the crew for supporting each other, the whole BeatDown Outdoors team. Thanks, Rick Wheeler from DR Marine and Fish for wanting to sponsor a crappie guy and providing me with an 8616 DR. And thanks to Jerry from Crappieholic, Anne from the Original Rod Sox, James from Trade Craft Outdoors, Spike-It Outdoors, and Power-Pole.”

The runner-up spot went to TC Lloyd from Hartsville, SC, and Mike Huffstedler from Chapin, SC. They teamed up to bring 21.02 pounds to the scales in the two days of fishing. They earned a check for $5000 and an 8-foot Power Pole.

Lloyd and Huffstedler fished the Seneca Arm of Lake Hartwell on Friday in about 30 feet of water. They used Jenko and Pops jigs. The fish moved shallower on Saturday. The team reported most of their fish came from about 9 feet of water on day two. They caught about 50 crappies for the weekend.

Local angler Shaun McAbee from Anderson, SC, and Shannon Shuttle from Bostic, NC, teamed to weigh the 3rd place winning bag of 21 pounds even, just .02 pounds behind the 2nd place team. They earned a check for $4,000 and a Smooth Moves gift card. The team also placed 2nd in the National Points Championship and finished 2nd place in their regional competition.

McAbee and Shuttle fished in Tugaloo Creek at the Hartwell event. They were targeting their fish with Garmin LiveScope. They were one pole fishing with hair jigs in natural colors. They caught fish in water that ranged from 10 to 40 feet deep over cover. The
the team culled through about 60 crappies for the weekend competition.

Nick Dowda from Batesburg, SC, and Matthew Williams from Leesburg, SC, brought 16.77 pounds to the scales to earn the 4th place check of $3,000 plus Cabela’s gift cards.

Dowda and Williams also fished the Seneca Arm of Hartwell. They were using Garmin LiveScope and one poling over a man-made structure. The team used a combination of jigs and minnows. They were fishing water ranging from 10 to 18 feet deep to catch a
total of 35 to 40 crappies for the weekend.

Sportsmen of the Year

Pro Division anglers Steve Jeffers and Patrick Stone from Indiana were awarded the Sportsmen of the Year honors. They received $500.00 and two Smooth Moves gift certificates.

“I was proud to see Steve and Patrick chosen for this award,” said CUSA Operations Manager Darrell Van Vactor. “They truly are a team that works very hard to make the sport of crappie fishing better for everyone.” 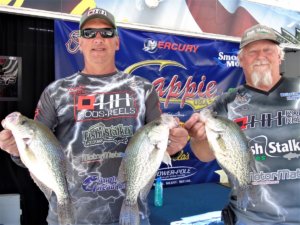 The top spot in the Amateur Division went to William Hinson from Cassatt, SC, and Tommy Slice from Chapin, SC. They came from 3rd place on day one to take the lead with a two-day weight of 18.11 pounds. They received a Ranger RT 188-C with Mercury
115 hp engine, trolling motor, electronics, onboard charger, and Driftmaster Rod Holder Rack. The total value of the package is $31,250.

“It was a great week on Lake Hartwell in the Crappie USA Classic,” recalled Hinson. “Tommy slice and I have been fishing crappie tournaments for over 25 years and it all came together this weekend. Conditions were tough in pre-fishing with 9 inches of rain
that fell the week before causing the crappie to scatter from their normal holding patterns.”

Hinson and Slice found their fish just off the main river channel in small cuts. The fish were in 18 to 28 feet of water holding tight to the structure. “We had 3 main spots so on day one our game plan was to get 7 good fish and move
on,” said Hinson. “We wanted to have a chance to repeat catching them in those spots on Saturday.”

On Friday they weighed in 8.96 and that was good enough for third place and in a good position for the final day.

“We caught all our fish using the Garmin LiveScope Panoptix System,” continued Hinson. “We fished with HH Rods and Reels and .5-inch Fish Stalker jigs in glimmer blue on orange Skipper’s jig heads. When the fish got finicky we used small minnows and light lead to coax them into biting.” On Saturday the team weighed in 9.15 pounds for their two-day total weight that gave them the win.
“Both days we caught close to 25 fish,” recalled Hinson. “Weather condition got tougher on Saturday with 10 to 20 mph wind and gusting higher.”

Heath Martin and Matt Eskridge teamed up to bring the 2nd place weight to the scales in the Amateur Division. The Shepherdsville, KY team weighed a two-day total of 15.93 pounds to earn the runner-up spot and earn a check for $2,500 and an 8-foot Power Pole. Martin and Eskridge fished just past the stadium under the bridge. They used Garmin LiveScope to target brush piles. They were one poling Freaky Franks baits in water that ranged from 12 to 20 feet deep. Red/chartreuse was their color of choice as they caught between 25 and 40 crappies on the weekend.

The third spot went to Richard Malcolm from Madison, GA, and Joseph Dickens from Waynesboro, GA. Their 3rd place weight of 15.21 pounds earned them a check for $1500 and a Smooth Moves Seat coupon.

Malcolm and Dickens fished 30/20 Creek shooting docks in deeper water. They used a wide variety of jigs and colors as they searched for what worked best in the stained water. After fishing many docks they put somewhere between 40 and 60 fish in the boat in the two days of tournament fishing.

Tracy and Chuck Davis teamed up to bring 14.82 pounds to the scales and claim the 4th place finish. The Lexington, SC team earned a check for $1000 and $200 in Cabela’s Gift Cards. They also chose to soot docks to catch their fish. They targeted docks in areas that had deeper water nearby. They stayed in the mid-lake area using Baby Bass and shad-colored patterns to catch 25 crappies for the weekend.

David and Braden Miller were awarded the top adult/youth team on the Amateur Division. Braden received a $500 scholarship.

Darrell Van Vactor, CUSA Operations Manager, sent special thanks to Neal Paul with Visit Anderson SC for hosting the event and working so hard with the logistics to help make the event a memorable trip for all the anglers and staff. He also thanked Green
Pond Landing for hosting the weigh-ins and the Hilton Garden Inn for great accommodations for the staff and many anglers.

“I have never worked with another CVB where every employee we interacted with had the exact same mission,” said Van Vactor. “Their goal was to make sure no one needed or wanted anything that was not supplied. What a pleasure it was to work with Neil,
Whitney, and their entire staff this week.”

“It was a great weekend in Anderson, SC,” concluded Van Vactor. “Everyone caught good numbers of fish and enjoyed the fantastic hospitality found in Anderson and the surrounding areas.”

For more information on the Classic and other CUSA events visit the website at www.crappieusa.com and Crappie USA Tournament Trail Facebook Page. The CUSA office is available by phone at 502-384-5924.